All members are welcome to attend.  We will have our usual break between the first and second hour of each bee school meeting and anyone who would like to bring food/snacks to share with the group is encouraged to do so.  See you at bee school!
Posted by Anonymous at 2:22 PM No comments:

Take an intimate look a life of a beehive. This infrared view of the inside of the hive shows the complex inner workings of the colony as they build combs, produce honey, protect the queen, and raise a new generation of workers and drones. Building their communal home inside a large hollow log, the colony is located in the town of Waal in Bavaria, Germany.

Posted by Anonymous at 1:03 PM No comments: 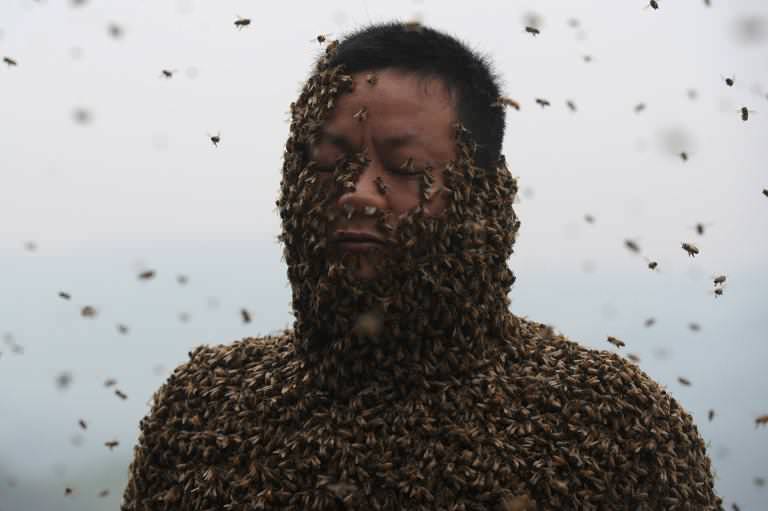 Whatever you do, don't sneeze.
Beekeeper She Ping of Chongqing, China, managed to stand still while 100 pounds of bees (approximately 460,000 stingers) swarmed and crawled over his body, according to local media reports cited by Reuters andAgence France-Presse.
And, yes, he did it on purpose. What can we say? The man loves bees.
The feat was accomplished with queen bees. The queens drew hundreds of thousands of worker bees toward the intrepid She. Helpers used incense and smoke to keep the bees away from the beekeeper's face until he was ready. We're willing to bet She buys his aloe by the gallon.

As for why She subjected himself to hundreds of thousands of swarming bees with the potential to leave marks, it was all done in the name of commerce. He told AFP that although he was "very nervous," he did it to promote his honey.
"It hurt but I didn't dare to move," She told AFP.  "The main preparation is avoiding taking a shower, especially avoiding using soap because it can excite the bees," he said. 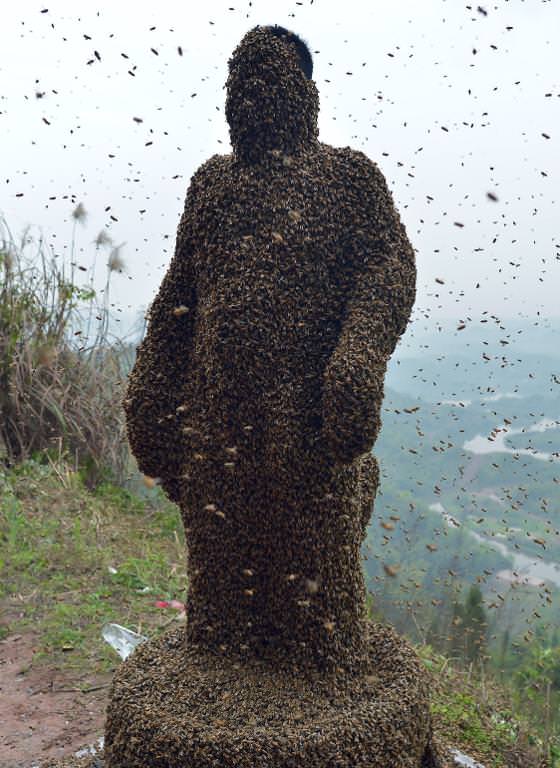 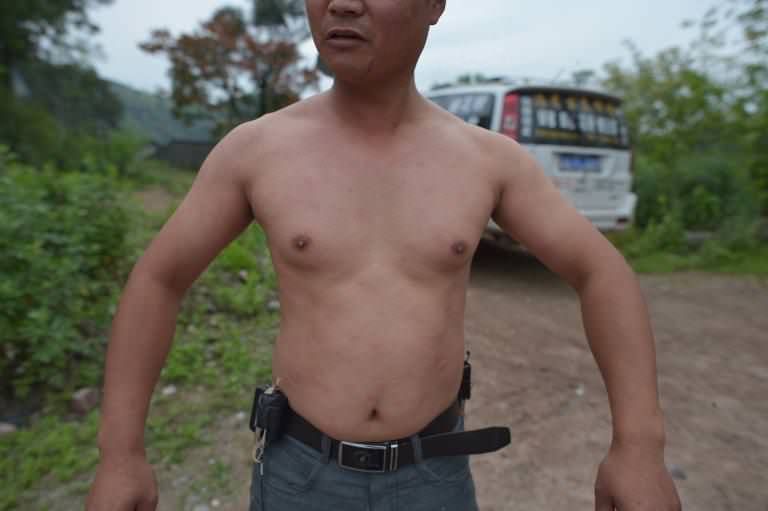 Posted by Anonymous at 11:58 AM No comments:

Brushy Mountain's "Back to Basics" April

Back to the BasicsYou have set up your hives and installed your bees with the queen cage attached to a frame. We know that you are eager to check on them to see how they are doing but disrupting the colony will hinder them. Give them time to acclimate to the new queen and release her on their own (will typically take 5 to 7 days). Once you have given them time to release the queen on their own, you can open up your hive and see your bees hard at work!

When you first open your hive to remove the queen cage, you may notice no substantial changes. Your bees are working frantically to draw out comb, giving space for your queen to lay her eggs and room to store their nectar. There will be some foraging bees sent out to bring in nectar and pollen but the majority of the force will be building up the frames. Providing feed during this time is vital. As the bees work the frames, they will be consuming feed almost as fast as you are providing it for them. Ensure they have the feed they need!
Other things to be aware of:
Installing your package is just one of the first steps into this exciting hobby. Once your queen has been released and starts laying eggs, you will begin to see a large field force in your garden, buzzing from flower to flower.
Here are some helpful hints to help you in these beginning months:
With the first steps behind you, you will begin to see the true joy of beekeeping. Keep feeding your bees and let them build up in population.

Question of the Month

Your hives have made it through winter and are now busting at the seams with bees. Do you continue to add hive bodies and build up your hive? Can you create a split? Should you worry about swarming?

An overwintered hive will begin brood production before winter comes to an end. By the time spring gets here, they will be high in population and ready for the nectar flow. This can lead to the possibility of swarming and requires attention from the beekeeper.
You have two options to help prevent overcrowding in the hive:
Creating a split seems simple, but there are different variations (below is just one example how to create a split) and challenges involved. This is however, a great and convenient way to establish a new colony in your bee yard.

When making a split, you will want to have your equipment setup and ready for the transfer of frames. It is best to grab 4 or 5 frames of mixed brood in various stages of development. This will keep the population going as new bees are hatched and as larvae continues to develop. The hive's survival will be dependent upon the newly hatched bees and developing larvae. Frames of nectar and pollen will be essential in feeding the colony until they are able to increase in population.

Right now your split is queenless. You have the option of purchasing a fertilized queen (before you create the split) and introducing her to your split colony. It will take 5 to 7 days before your colony will become acclimated to her, but once she is released, she will begin laying. If you know that you transferred over frames of brood with eggs that are less than 3 days old, your split hive will realize that it is queenless and will begin to raise out their own queen from the fertilized eggs. There are numerous risks in allowing a colony to raise out their own queen.Dangers in raising out a new queen: low drone population, rainy weather, birds, car windshields, ect. Aside from these threats, it can take 2 to 3 weeks before the queen is able to begin laying (if she is properly fertilized).

After transferring your frames and ensuring your split is queen right, they will continue to grow. The split is a new colony and should be treated as such. Add a feeder to the split and give them time to grow before checking on them. Your mother hive will need to be monitored to ensure it does not become overcrowded. Some beekeepers can create multiple splits from one hive, depending upon the strength of that colony.

All members are welcome to attend.  We will have our usual break between the first and second hour of each bee school meeting and anyone who would like to bring food/snacks to share with the group is encouraged to do so.  See you at bee school!
Posted by Anonymous at 2:20 PM No comments: