US Retailers Look to Limit Pesticides... 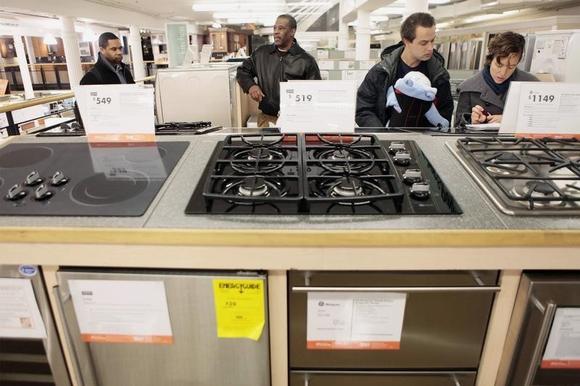 (Reuters) - Home Depot (HD.N) and other U.S. companies are working to eliminate or limit use of a type of pesticide suspected of helping cause dramatic declines in honeybee populations needed to pollinate key American crops, officials said on Wednesday.
The moves include requiring suppliers to label any plants treated with neonicotinoid, or neonic, pesticides sold through home and garden stores.
Atlanta-based Home Depot, the world's largest home improvement retailer, is requiring its suppliers to start such labeling by the fourth quarter of this year, said Ron Jarvis, the company's vice president of merchandising/sustainability. Home Depot is also running tests in several states to see if suppliers can eliminate neonics in their plant production without hurting plant health, he said.
"The Home Depot is deeply engaged in understanding the relationship of the use of certain insecticides on our live goods and the decline in the honeybee population," Jarvis said in an email.
Also on Wednesday, BJ's Wholesale Club [BJ.UL], a warehouse retailer with more than 200 locations along the East Coast, said it was asking all of its vendors to provide plants free of neonics by the end of 2014 or to label such products as requiring "caution around pollinators" like bees.
At least 10 other smaller retailers, with locations in Minnesota, Colorado, Maryland and California, have announced plans to limit or eliminate neonics from plant products.
The class of pesticides known as neonics are sold by agrichemical companies to boost yields of staple crops such as corn, but are also used widely on annual and perennial plants used in lawns and gardens.
A report issued on Wednesday by the environmental group Friends of the Earth said that 36 out of 71, or 51 percent, of garden plant samples purchased at top garden retailers in 18 cities in the United States and Canada contained neonic pesticides.
Scientists, consumer groups, beekeepers and others say bee deaths are linked to the neonic pesticides. But Monsanto, (MON.N), Bayer (BAYGn.DE) and other agrichemical companies say a mix of factors such as mites are killing the bees.
The U.S. Department of Agriculture estimates total losses of managed honeybee colonies at 23 percent over the winter of 2013-14, the latest in a series of annual declines.
Last week, the White House announced a plan to fund new honeybee habitats and to form a task force to study how to reverse the honeybee declines. The bee die-off is worrisome for agriculture because honeybees pollinate plants that produce about a fourth of the food consumed by Americans.
An analysis of 800 peer-reviewed studies released this week by the Task Force on Systemic Pesticides, a group of scientists from several countries, concluded that neonics were a key factor in bee declines and had other harmful effects on the environment.
(Reporting by Carey Gillam in Kansas City; Editing by Jonathan Oatis)
ORIGINAL SOURCE:  REUTERS

Posted by Anonymous at 3:54 PM No comments:

The swarm  I rescued a few weeks ago, is now kicking some serious butt!  The swarm queen, who I am now calling Catherine II or Catherine the Great is an egg laying machine!  Look at this brood pattern!

And the rest of the girls are working hard and putting up some honey!  I can't wait to try it!

Posted by Anonymous at 3:08 PM No comments:

Last Saturday, I had the opportunity to rescue a swarm from a small apple tree in Northampton.  It was a good sized swarm, and lucky for me I could reach it with both feet on the ground!  The bees have since been moved from my swarm catching nuc box to two 8 frame deeps.  I plan to peek in and check the progress of the swarm queen this weekend.  Let's cross our fingers and hope she's a good layer!

Posted by Anonymous at 3:22 PM No comments:

Brushy Mountain's "Back to Basics" June

Back to the Basics:  Moving Your Hive

Beekeepers will get their hives all setup and painted in a certain location, but sometimes it is not the desired location or they want to move their bees to a different area with a better honey flow.
Either way, sometimes it is necessary to move your hive.

Once bees become established in a certain location, they will go on orientation flights. They start off in small circle, flying back to the hive, and grow the circle until they are set on the location of the hive. Moving a hive will disrupt where the bees are oriented to and beekeepers can lose many foraging bees (Beekeepers hate losing bees!). If you intend to move your hive, we suggest following the rule of 3 (up to 3 feet or over 3 miles). If you move a hive across your 10 foot yard, the bees will return to where the hive was originally located.

If you are intending to move your hive, no matter how far, screen off the entrance the night before with hardware cloth. Your foraging bees will come back to the hive at night and will be leaving when the sun comes up. Screen off the entrance at night so you will be transporting all your bees (inevitably there will be a few stragglers left behind). Don't strain when moving your hive, use a hive carrier or a hive strap to make moving easier.

If you intend to move your hive across your yard or a short distance away from its original location, you must move it off site (over 3 miles away) for a week and then move it back to where you find more suitable. If you intend to move it to a separate location for a better/different honey flow, ensure that you are moving it further than 3 miles from its original location.

Wait... there is another way?
Sometimes it is difficult to continuously move your hive.

If your desired location happens to be further than 3 feet and less than 3 miles (a.k.a. across the yard), you can use a different method. To trigger the bee’s orientation flight, the environment outside of the hive must be significantly different. Obstruct or impede the entrance to the hive with brush (grass, tree branches, straw, etc.) so that when the foraging bees leave the hive, they must crawl through the “brush” before they can fly. After a day, remove part of the brush and continue this process until all the brush is removed after three days. They will see the disturbance in the environment and reorient themselves.

It is best to leave the hive in its initial location. Moving the hive will hinder the bee’s production for days and cause stress within the colony. Also note that 10% of queens are lost when moving a hive. Set up the hive in an ideal location that will suit their needs as well as yours.
Posted by Anonymous at 3:42 PM No comments:

Question of the Month

I went out to my hive and noticed a good portion of my bees were gone!!!I saw swarm cells last time I checked, but did not think they would swarm this late into the year. Now, I cannot find a queen anywhere to purchase!
What am I supposed to do with the remaining bees?

Swarming is always an issue a beekeeper must deal with.
The daughter queen will hatch a virgin and must go on a mating flight to become fertile. A mating flight will span the course of 2 – 3 days in which the queen will mate with 10 – 15 drones. If all goes well she will return to the hive and begin laying, in which you will begin to see eggs 1 -2 weeks after your bees swarmed.

As many of us have experienced, things never go well and we must prepare for all things to go wrong.
Once your virgin queen goes on her mating flight, she may not return.
First, beekeepers must check and make sure there are eggs to ensure there is a queen in the hive; Second, you must check the brood pattern to see if she is properly mated. A poorly mated queen may have a spotty brood pattern with multiple empty cells rather than solid with few empty cells or she may be laying drone eggs. If everything appears to be ok, then you know your hive is queen right!

2 alternatives to make sure you come out with a queen right hive:


In the end, if you find eggs and the brood pattern looks good, you have a queen right hive.
Posted by Anonymous at 3:40 PM No comments:

Spider Venom May Save the Bees...

Spider venom may save the bees
Bee populations, both wild and captive, are in decline in Europe, the Americas and Asia for reasons scientists are struggling to understand


PARIS - Venom from one of the world's most poisonous spiders may help save the world's honeybees, providing a biopesticide that kills pests but spares the precious pollinators, a study said Wednesday.

Bee populations, both wild and captive, are in decline in Europe, the Americas and Asia for reasons scientists are struggling to understand, with industrial pesticides among the suspected culprits.

The EU has since placed a temporary ban on some of these chemicals.

Now a team led by Newcastle University, England, found that a biopesticide made with a toxin from Australian funnel web spider (below) venom and a protein from the snowdrop plant, was bee-friendly.

"Feeding acute and chronic doses to honeybees, beyond the levels they would ever experience in the field... had only a very slight effect on the bees' survival and no measurable effect at all on their learning and memory," said a university statement.

Neither adult bees nor larvae were affected, said the study published in the journal Proceedings of the Royal Society B.

The biopesticide was previously shown not to be harmful to humans, despite being highly toxic to a number of key pests.

Bees account for 80 percent of plant pollination by insects. Without them, many crops would be unable to bear fruit or would have to be pollinated by hand.

The Food and Agricultural Organisation (FAO) says pollinators contribute to at least 70 percent of the major human food crops.

The economic value of pollination services was estimated at 153 billion euros ($208 billion) in 2005.

"There isn't going to be one silver bullet," said study co-author Angharad Gatehouse.

"What we need is an integrated pest management strategy and insect-specific pesticides will be just one part of that."

When: Thursday June 26th at 7pm

If you plan to sell honey or beeswax products at the Big E this year, you must attend the Big E Sellers meeting.
Posted by Anonymous at 12:22 PM No comments: